SAN FRANCISCO, May 21, 2021 /PRNewswire/ -- Just in time for the basketball playoffs, Hotwire® is launching a new edition of the "Hotwire® Effect" game. This "pick 'em" style game will be entirely free to play and features guaranteed prizes totaling $25,000. The new game tips off on May 22, 2021. 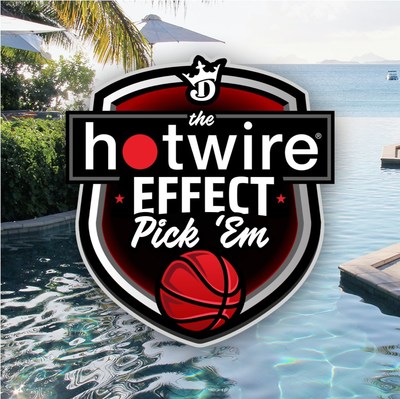 The "Hotwire Effect Pick 'Em" game was designed by DraftKings to challenge players' strategic approach by mirroring Hotwire's mystery booking process that enables travelers to score incredible deals on hotels. Just like booking a hotel on Hotwire, participants will make their picks based on stats rather than player names. The actual player names will be hidden until after the games start, marking a new way to draft and a smarter, better way to travel.

Hotwire, the travel app known for its mystery Hot Rate® deals, lets travelers pick their hotel using everything from the neighborhood, to customer ratings, and even featured amenities. The name of the hotel is only revealed after booking, helping savvy travelers score a better hotel than they thought they could afford. The excitement or "Hotwire Effect" that players will experience when seeing the results of their winning selections is matched only by the thrill that travelers feel when the amazing hotel they were able to score on Hotwire is revealed.

"The Hotwire Effect is what makes Hotwire different from other travel sites. By revealing the property  name after booking is complete, not only do we enable travelers to stay in amazing hotels for the same price they would have paid for a less-great hotel - we give them the satisfaction of knowing that they shopped a bit smarter than everyone else," said Melissa Postier, Brand Director, Hotwire. "The Hotwire Effect Series seeks to give players that same rush - that their skill and intuition allowed them to be able to draft a better team than their competition."

How to play The Hotwire Effect Series*:

Launching today and running five contests over the next five weeks, the "Hotwire Effect Series" offers players the opportunity to take a shot at $25,000 in total prizes. To learn more and sign-up for Hotwire Effect Pick 'Em, please visit www.draftkings.com/hotwire.

Hotwire is a leading discount travel site. Launched in 2000, Hotwire, Inc. was one of the first online travel sites to work with suppliers directly to book unsold inventory. By simply hiding the brand name, Hotwire can offer customers deep savings on hotel rooms, rental cars, and flights.

Hotwire is an operating company within Expedia Group. For more information, visit http://www.hotwire.com.

®2021 Hotwire, Inc., an Expedia Group Company. All rights reserved. Hotwire, Hot Rate and the Hotwire logos are trademarks of Hotwire, Inc. All other trademarks are the property of their respective owners. CST# 2053390-50

As the user progresses through their picks, it becomes harder to know who they are;